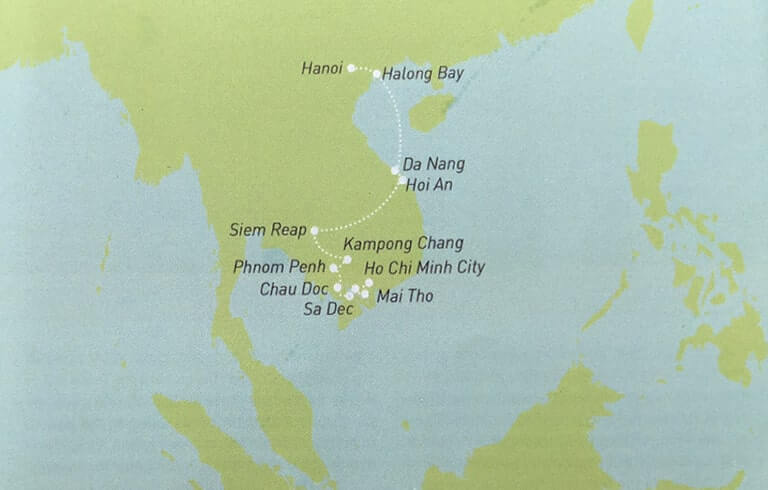 Steeped in controversial history and wars, Hanoi is the resting place of the famed and honoured Ho Chi Minh.  The HCM Mausoleum is located in the center of Ba Dinh Square where HCM read the Declaration of Independence on 2 September 1945, establishing the Democratic Republic of Vietnam. The embalmed body of HCM is preserved in the cooler, central hall of the mausoleum and is protected by a military honour guard.  His body lies in a glass case under dim lights and obeying strict rules, the public can file past and pay their respects.

My one suggestion if you want to visit the mausoleum, is to check the opening times and get there way before they open.  The queues are horrendous.

With a multi-cultural mix of Russian, Chinese and French, this city is full of ancient pagodas, well preserved buildings and museums. The Old Quarter is a fascinating place to wander on foot where you can find Shoe Street, Bag Street, pretty much anything you want street, as well as modern cafés and restaurants producing delicious Vietnamese food.  If it’s too hot for a stroll, take a cyclo ride but negotiate the rate before you get on.

Crossing the streets can be daunting for first-timers but you learn very fast. If you want to get to the other side, act like a local – keep constant eye contact with approaching vehicles (mainly scooters), step out and walk slowly across the road. And never trust the traffic lights. 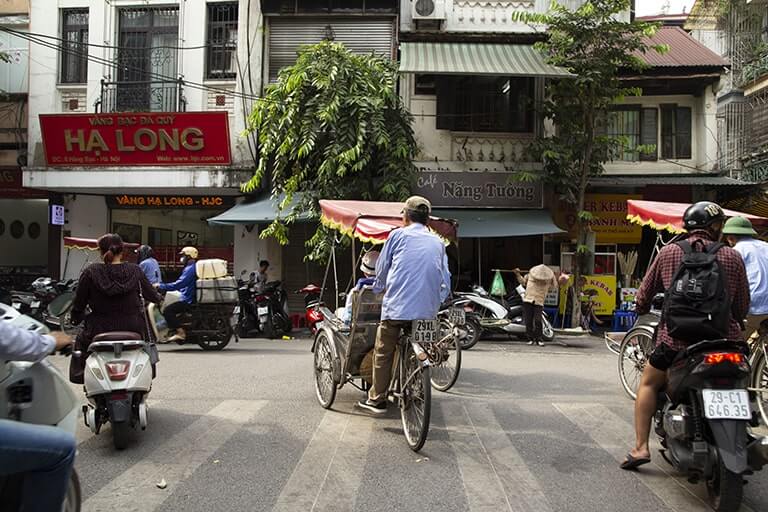 Halong Bay, located in the Tonkin Gulf, comprises thousands of beautiful limestone islands and, in my opinion, shouldn’t be missed.  It was declared a UNESCO World Heritage site in 1994 and a two night cruise will leave you in awe of this majestic place.

For our cruise we boarded one of Indochina Sails’ fleet deemed ‘one of the most luxury and charming junks in Halong Bay’. We explored Sung Sot cave and took early morning tai chi lessons. Some of us tried night squid fishing and we watched demonstrations by talented chefs creating vegetable and fruit sculptures. By Sampan we went through a gap in the rock to the amazing grotto of Hang Luon and cruised by the fishing village of Cuavan. We visited a pearl farm and learnt how they cultivate the pearls, and yes there was shopping to be had.  Stopping at the popular island of Soisim for a swim was welcomed, as was the climb to the viewing platform to take in the fantastic view of the bay.

A very pleasant and informative cruise coupled with an amazing array of Vietnamese food. 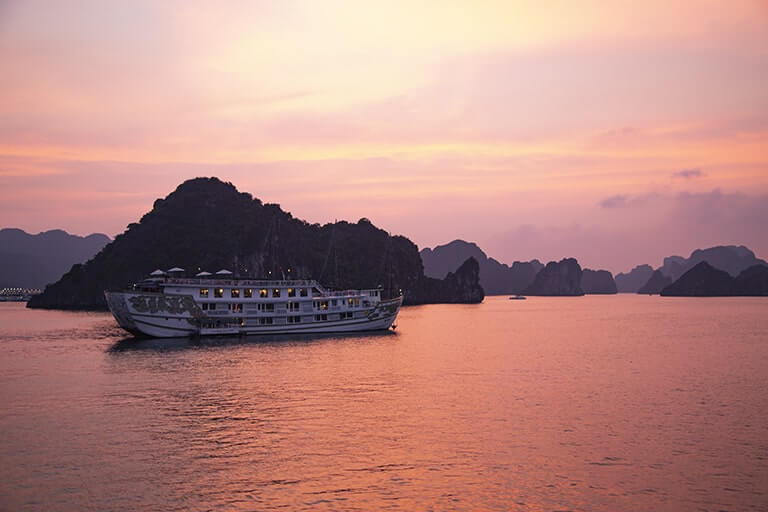 Our next tour destination was Hoi An.  Old Town Hoi An was declared a UNESCO World Heritage Site in 1999 and is a well-preserved example of a Southeast Asian trading port from the 15th to 19th centuries. It was considered by Chinese and Japanese merchants to be the best trading destination in all of Southeast Asia. The covered Japanese Bridge is a prominent and unique feature that dates from the 1500-1600s.

Now a popular tourist destination, Hoi An is a great place to get clothes made and there seems to be tailors on every street.  If time doesn’t permit, there are many shops offering 100% cotton garments ready to buy off the racks. Many modern restaurants and cafés are also dotted around the streets in which to sit and cool off from the heat. 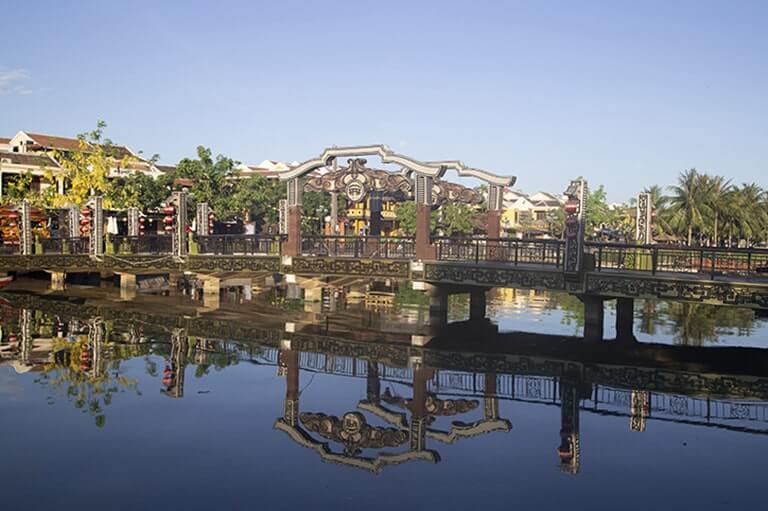 Image: Early morning in Hoi An

We then took a short flight from Da Nang in Vietnam to Siem Reap in Cambodia where we visited the largest religious monument in the world - Angkor Wat.

Built during the reign of Suryavarman II in the first half of the 12th century, it was not only the grandest of all the Khmer temples but also a city in its own right.  The outer limits of Angkor Wat, including a broad moat, cover nearly 200 hectares.

Angkor Wat was originally dedicated to the Hindu God Vishnu but was gradually converted into a Mahayana Buddhist temple by Jayavarman VII in the late 12th century.  Jayavarman VII embarked on a building spree whilst in power, building the new capital city of Angkor Thom including Bayon, Ta Prohm and many more Buddhist temples.  However, his successor Jayavarman VIII returned to Hinduism and embarked on an equally massive spree of destruction, defacing many Buddhist images and crudely altering some back to Hindu.  Hinduism lost out eventually to Buddhism but today the temples are used by both Hindus and Buddhists.

Visiting the many temples can be tiring and temperatures can reach above 40°C so a cool way to travel through the Angkor Archaeological Park is by tuk tuk.  It is a good idea to take a guide who can explain the intricate details of the carvings and inscriptions on the walls that tell the stories of these early civilisations.

Angkor Wat has become the symbol of Cambodia and is the country’s prime tourist attraction.

The Mekong seven night cruise was something I was looking forward to. Boarding our boutique river cruise ship The Jahan, we started from Kampong Cham and stopped at many places en route to Ho Chi Minh City.  There were many excursions off the ship to explore and see how local villagers lived and earnt a living.  I now know how those rice paper rolls that I serve for happy hour are made, packaged and exported. We watched Khmer-styled pottery being formed and cruised the wetlands where floating houses and fish farms were in full production. Both Vietnam and Cambodia have very different economic classes – from five star hotels to boat people living on the river. That gap is never more evident than cruising along the Mekong River.

We stopped in Phnom Penh, the capital city of Cambodia, which boasts the magnificent Royal Palace, a massive Central Market, museums, pagodas, and is in close proximity to the Killing Fields (a very sombre excursion but an important part of Cambodia’s horrific history).

We disembarked The Jahan close to Ho Chi Minh City which was formally known as Saigon (most locals from the south still refer to it as Saigon). Many tourists start their travels of Vietnam from here.

It is the most populous city in Vietnam and is home to the Ho Chi Minh City Stock Exchange. There are scooters beeping and zig-zagging through over-populated streets and it boasts the famous Ben Thanh market where many a bargain can be found.

We took a bus ride out to the Cu Chi Tunnels that were built by the Viet Cong during battles for the south. This was another sombre excursion but showed how a vast network of tunnels stretching for over 150 kilometres were used by Viet Cong soldiers as hiding spots as well as serving as communication and supply routes, hospitals, food and weapon stores and living quarters for the North Vietnamese fighters.  It is amazing to see and acknowledge how these people survived (or didn’t) while fighting this war. It is a testament to Ho Chi Minh and his off-siders how they engaged in such dedicated tactics to ensure victory in this war.

Throughout this tour, we learnt so much about the history and cultures from our local guides of these two amazing countries. The people we encountered on our travels and their stories of hardship throughout the wars was truly humbling.

A fun and very interesting tour. Check it out below from the Maher Tour website. 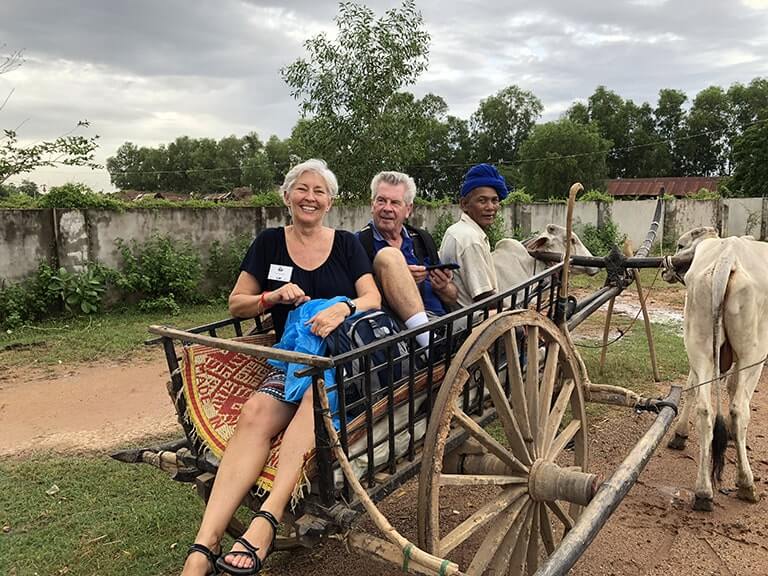