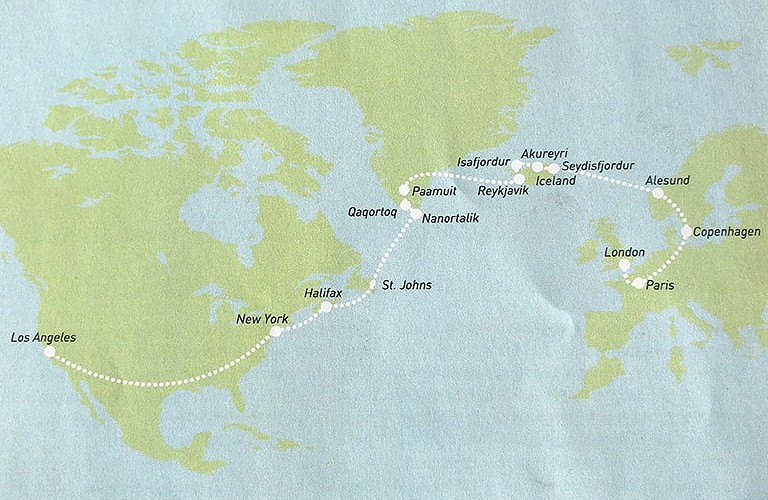 Last August I had the privilege of taking 13 lovely people away on a five week tour of LA, London, Paris, Copenhagen and New York.  But it was the 20 night cruise on the Holland America Line Zuiderdam that I was most excited (and anxious) about.  I’m not good ‘on’ the water but I wasn’t going to pass up the chance to tick Iceland and Greenland off my bucket list.

Our first cruise stop was Ålesund, Norway. This stunning picturesque sea port is on the west coast of Norway, at the entrance to the Geirangerfjord.  It’s known for its Art Nouveau style of architecture as most of the town was rebuilt after a wind-driven fire destroyed almost the whole city centre on 23 January 1904. The port was established in the early 19th Century and is now the most important fishing harbour in Norway thanks to its central location and the 1970s discovery of oil in the North Seas.

Whilst onboard the Zuiderdam, you’re given the choice of many tour options at each port (except Greenland where there are no organised tours as yet). The night before arriving at a new port, the Cruise Director or cruise staff give a presentation of what you can look forward to.  So for Ålesund I chose the Romsdal and Trollstigen - The Troll’s Road.

This is a spectacular piece of road construction that winds along steep mountainsides.  It rises 2800 feet above sea level and consists of 11 hairpin bends.  The road is narrow with a gradient of 9% and the longest vehicles permitted is 13.1m.  Understandably, it is closed during winter and I was glad I wasn’t driving! 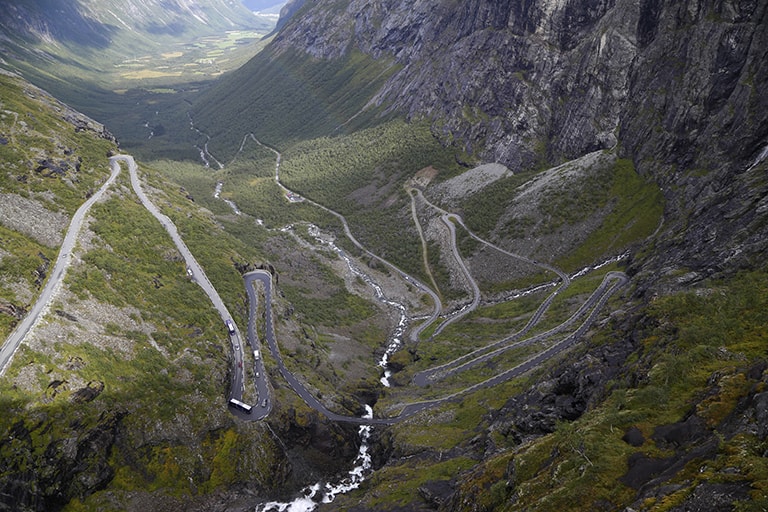 After crossing the Norwegian Sea and the North Atlantic Ocean, Djúpivogur in Iceland was our first experience of tendering ashore.  It is a small fishing village on the eastern coast, and boasts the record for the highest temperature in Iceland – 30.5°C (87°F) recorded in June 1939.

Due to a bad storm, our Captain, Bart Vaartjes, decided to bypass our next scheduled port (Seydijofordur), and carry on to Akureyri instead, nicknamed the ‘capital of North Iceland’. We did cross the Arctic Circle to get there!  We stayed extra nights here while waiting out the storm.  It is a neat port town with a variety of hiking trails and walking paths within the city limits.  The Botanical Gardens founded in 1912 contains nearly every native plant found in Iceland (approximately 450 species) plus another 7000 exotic plants. It’s well worth the visit.  Iceland has many wonderful waterfalls and the ‘waterfall of the gods’ – Godafoss - is accessible by tour from Akureyri.  It falls from a height of 12m over a width of 30m.  Stunning!

Isafjördur is the capital of the rugged Westfjörd region and the birthplace of two of Iceland’s presidents. It is a nature lover’s paradise with valleys and cliffs packed with birds.  Quiet and uninhabited fjords offer peace and tranquillity while ski slopes, golf courses and hiking trails will entice the more active.

I was excited to reach Iceland’s capital and largest city – Reykjavik. It features tall mountains, geothermal activity, the Blue Lagoon, an interior of lava fields and glaciers, just like New  Zealand only colder.  A trip in a 4x4 driving over the Langjökull glacier to an ice cave was one of my highlights here.

Cruising through Prince Christian Sund was spectacular to say the least. Tall ice-capped mountains, icebergs, rough seas and winds up to 80 knots kept us on our toes.  The scenery was magnificent and our Captain got us through there with no hitches.

Greenland was a surprise for me as I wandered through Qaqortoq (pronounced Ha Hor Toch).  A quaint little town with brightly coloured wooden houses but modern in their hospitality options. With a population of approximately 3000, their supermarkets stock everything you would want - Colgate toothpaste, Dolmio pasta sauces, Bounty bars and even some Australian Jacob’s Creek wine. 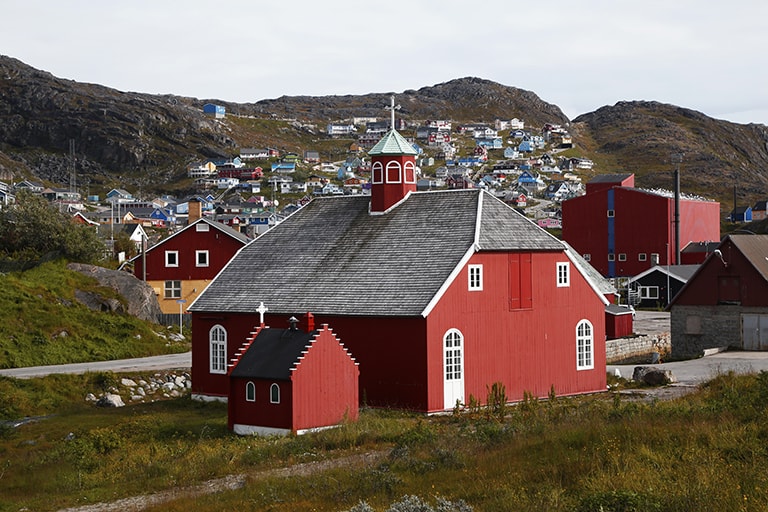 Nanortalik was even smaller but when their local choir put on a performance at their church, I had an amazing sense of déjà vu.  Had I been here before?  I walked all around the town which has a population of approximately 1000 and found the people to be so friendly and welcoming to the 1871 cruise ship passengers.

After three days at sea, most passengers were keen to disembark and explore our next port, Halifax, Nova Scotia.  Peggy’s Cove was a popular choice and I am glad I chose this tour. It is a pretty fishing village just 40km from Halifax.  Peggy’s Point Lighthouse sits on top of the rocks and is one of the most photographed and visited sites in the country.  The landscape is beautiful and green with lots of small coves which would be excellent for sailing.

Fairview Lawn Cemetery just out of Halifax, is the final resting place for 121 victims who drowned on the RMS Titanic. It is quite eerie walking past the small grey granite markers with the name and date of death. However, one third of the victims were never identified and their markers contain just their date of death.

History aside, Halifax has a wonderful waterfront boardwalk including a sea bridge and lots of craft markets, stalls and museums.  You can stop and watch Nova Scotia crystal being transformed into beautiful ornaments fit to adorn your shelves at home.  I couldn’t resist.

New York City was our final port on the cruise, and what can I say?  It’s fast, loud, busy, smelly, crowded, exciting and I love it.  With an estimated 8,398,748 people crammed into a land area of about 784 km² (302.6 square miles), I couldn’t believe my luck to stumble across a little café located in the heart of the bustling Flower District on 148 W 28th Street between 6th and 7th Avenue.  A Little Taste (ALT) is a European boutique style café with only a few stools to perch on but where the customer is enticed to encounter ‘a little taste’ of Europe.  I call it my NYC local. 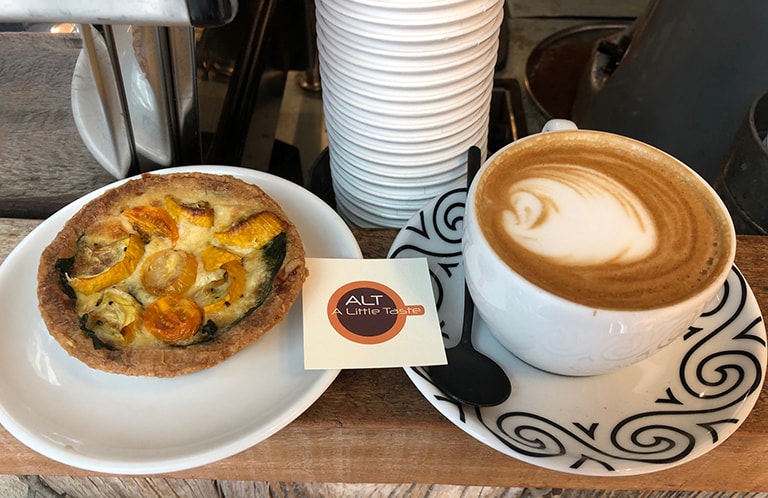 This was a fabulous trip which I would do again.

One thing I did realise early in the cruise, however, was that doing a yoga class on the top level at 7am in rough seas was not for me. But I could definitely handle more floating icebergs, gala dinners, talks, shows, tours and fun.